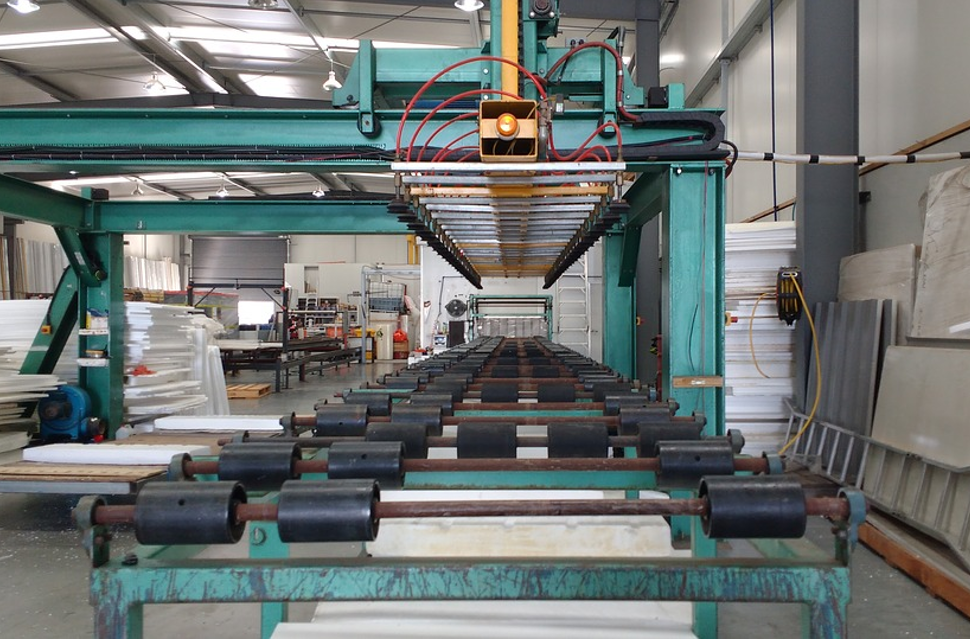 Once again, states in the West led the way, with an increase of 12,500 blue collar jobs for the region, followed by 9,200 and 7,900 jobs in the Midwest and South respectively. The Northeast, however, didn’t fare as well with a loss of 2,000 jobs, the bulk of which occurred in construction. The region experienced some severe weather, which could explain the dip. But one would expect a similar effect in the nearby Midwestern states as well. Either way, this is likely a blip that won’t be repeated in the May jobs numbers.

The big news in the April data is manufacturing. When is a slump a slump? We have three months of data from the Bureau of Labor Statistics showing little to no job growth in the sector. The average growth over the last three months (February, March, and April) was 4,000 jobs compared with 21,330 in the prior three months (November, December and January). In addition, the Fed reported a 0.5 percent decline in manufacturing output in April after decreases on average of about 0.4 percent the previous three months. Production of durable goods declined almost 1 percent, with machinery; electrical equipment, appliances and components; and, motor vehicles and parts falling 2 percent or more.

As you can see in the figure below, jobs in these subsectors have been declining over the past three months, with motor vehicles and parts losing 6,800 jobs since January; electrical equipment, appliances and components losing 2,700; and, machinery manufacturing losing 900. Of the three, only jobs in the manufacturing of motor vehicles and parts are currently above prerecession levels.

Among the states, Michigan lost 2,500 manufacturing jobs last month. It was the second month in a row the state saw a decline, with the March loss adjusted upwards from 500 jobs to 1,100. Two months ago we highlighted the strength of manufacturing in the state, and jobs in the sector remain above prerecession levels. As always, month-to-month data are erratic, but given what’s happening in the industry, it’s worth keeping an eye on the state in the next couple of months.

After Michigan, Tennessee, Illinois, and Arkansas experienced declines in manufacturing by 1,900, 1,500, and 1,200 jobs respectively. The losses in these states also are noteworthy because Illinois, Arkansas, and Tennessee remain 78,100, 24,100 and 16,400 jobs below prerecession levels in the sector.

In terms of gains, Virginia added 2,100 manufacturing jobs last month. Growth in the sector also continues out West. The Four Corners states — Utah, Colorado, New Mexico and Arizona for those of you who haven’t taken a goofy picture of friends and family standing in four states simultaneously — may have picked up only small gains last month, but it’s worth highlighting the larger trend: Manufacturing jobs in the last 12 months have increased by 2.02 percent in the West, with a 3.54 percent increase in the Mountain division states. Arizona, Wyoming, Montana and New Mexico, however, remain below prerecession levels.

Construction jobs increased by 33,000 in April, continuing a rebound from a dismal February as March was also adjusted upward from 16,000 to 20,000 jobs. The Midwest experienced the biggest growth, with an addition of 15,840 jobs. Illinois and Missouri gained 7,500 and 3,400 jobs, respectively. The next largest increase in jobs by region was in the South, with the addition of 7,050 jobs. The majority of that growth was in Texas, which saw an increase of 5,800 jobs.

Wisconsin, Connecticut and West Virginia saw the largest decreases, at 2,400, 2,300 and 2,100 jobs respectively. While West Virginia is in the top three states that saw the largest decline in construction last month, it’s worth noting the larger trend in the state has been positive. As the West Virginia Center on Budget and Policy has noted, construction has driven state employment growth over the last couple years, with an April 2017 to April 2019 increase of 17,800 jobs. Data over the last couple of months have been erratic, so it’s worth keeping an eye on the state for any sign of a plateau in job growth.

As noted above, mining and logging jobs decreased by 3,000 last month, with the three-month average showing a decrease in 2,000 jobs. Examined separately, the mining sector minus support activities saw a decline of 1,600 jobs in the last month while logging has lost 1,700. If you look at the last 30 years, as the figure shows below, logging jobs have been on a steady decline, while growth in mining has been a lot more irregular. (Note that the mining sector is an order of magnitude larger than the logging sector.)

As noted above, mining and logging jobs decreased by 3,000 last month, with the three-month average showing a decrease in 2,000 jobs. Examined separately, the mining sector minus support activities saw a decline of 1,600 jobs in the last month while logging has lost 1,700. If you look at the last 30 years, as the figure shows below, logging jobs have been on a steady decline, while growth in mining has been a lot more irregular. (Note that the mining sector is an order of magnitude larger than the logging sector.)

Unfortunately, how this disparity is playing out at the state level is difficult to know since almost all states combine the sectors in their reporting and a handful combine the sectors with construction, presumably because the sample size would be too small to be meaningful. What we do know is that Texas led states with the biggest increase in mining and logging with 2,700 jobs. This reverses last month’s decline in the state, which was adjusted down to a loss of 1,100 jobs. States like New Mexico, West Virginia and Kansas picked up between 400 to 200 jobs, but this was offset by losses in the same range in Louisiana, Oklahoma, North Dakota and Montana.

Of the three sectors we highlight in this report, construction is the only industry that appears to be showing positive growth. If weakness in manufacturing and mining and logging continues, we may start to hear less in the media about record low unemployment and more about Americans who are losing out in a “great” economy.