We now have three months of state job data under President Trump. While the course of the economy is still largely the result of the policies that were put in place before Donald Trump came into office, it is reasonable to believe that we are now beginning to feel some impact of his administration’s policies.

If we look back to the start of the Obama administration the economy was in free fall, losing an average of 751,000 jobs a month in the three months before he entered the White House. April was the first month in which there was a slowing in the rate of decline, with May showing a far slower rate of job loss.

Of course President Obama had signed a major stimulus package in February, which was likely first affecting the economy by April. While President Trump has had no remotely comparable legislative accomplishments, he has had a policy of haranguing businesses about shifting jobs overseas, which he began even before he entered the White House. If this sort of haranguing is going to have an impact, it is reasonable to believe that we would see at least the beginning by this point.

The figure below shows the job loss for nine major manufacturing states in the Rust Belt over the period from January of 2000 to January of 2017. The starting point is picking up the job loss due to the run-up from the over-valuation and the rising trade deficit which began in the Clinton years. The job loss accelerated in the Bush years as the trade deficit continued to grow even as the economy slowed. There was another surge of job loss with the Great Recession in 2008 and 2009. 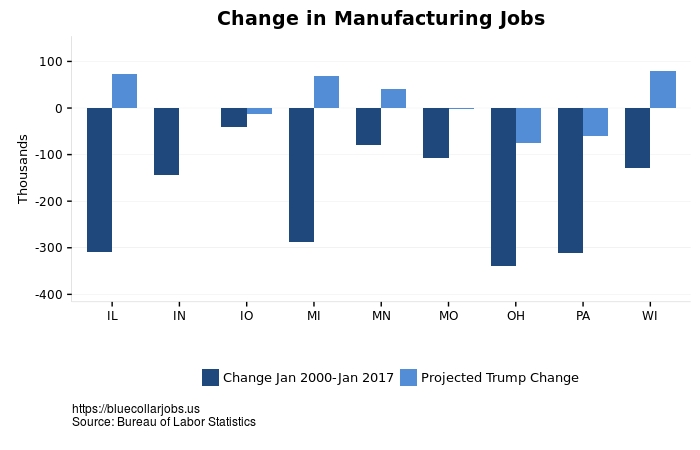 The projected job gains for each state assume that manufacturing jobs continue to grow at the same rate through two terms of a Trump administration as they did in the three months from January of 2017 to April of 2017. The projection is thirty two times the change in employment over this three month period.

As can be seen, for two states, Wisconsin and Minnesota , the projected job gains will be close to half of the job loss in the earlier period. In the case of Michigan and Illinois the projected job gains will be a bit less than one third of the manufacturing jobs lost between January 2000 and January 2017. Indiana is projected to have no gains, since the number of manufacturing jobs in the state was the same in April of 2017 as in January of 2017.

If the rest of the Trump administration looks like the first three months, the other states will see further job loss, compounding the impact of the lost manufacturing jobs from 2000 to 2017. In Missouri, the decline is projected to be modest, just 3.0 percent of the job loss in the earlier period. However, the impact will be far more negative in Pennsylvania and Ohio, losing 39.2 percent and 44.2 percent, respectively, of the manufacturing jobs lost in the earlier period. Iowa does worst of all by this measure, losing 64.2 percent of the manufacturing jobs lost from 2000 to 2017.

Of course, it is still very early in the Trump administration and at most we are just beginning to see any effect of his administration on job creation. From the standpoint of manufacturing jobs in the Rust Belt the picture is not promising to date.